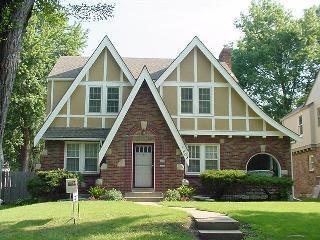 More than 5000 homes in dozens of neighborhoods bear the mark of Napoleon Dible, one of Kansas City’s earliest and most expansive developers. For more than 50 years, Dible methodically platted and developed tracts of land into the city’s early suburbs.

The beginnings of the N. W. Dible Company were the result of a bad business deal. Dible came to Kansas City in 1903 and soon invested money in a building business. His partner left town shortly after construction on three houses began, taking Dible’s money and leaving him with no experience in construction. Dible finished the houses and went on to larger projects that included a 17-house development at 37th Street and Harrison Boulevard and a 500-home neighborhood at 40th Street and Prospect Avenue.

Dible followed a rigorous schedule in his business and personal life. He never took a day off work, ate his meals at the same time every day, and did 100 push-ups a day into his 80s. He was one of the first developers to mass-produce homes utilizing the purchase of bulk materials and assembly-line construction. All of Dible’s houses were based on only four basic floor plans, and he made his money by selling large numbers of homes at a low profit. He called his salesmen after dinner each night for a daily report, asking each one, “What’s it going to be, steak or hot dogs?” Dible bought a new Cadillac every year, passing on his current one to his wife, Grace.

Dible’s thirst for orderliness and growth extended to his presidency of the Business Man’s Bible Class, a group that met downtown in the 1920s and 1930s. Under his leadership, the group grew from 35 members to the record-setting “World’s Largest Bible Class” of more than 52,000 men that joined a 1923 service in the old Convention Hall. Napoleon Dible insisted on providing affordable, well-built homes. His legacy remains today in the neighborhoods of south Kansas City, where arched doorways, circular towers, and half-timbered stucco houses stand solidly, fulfilling his vision.

We look forward to hearing from you!